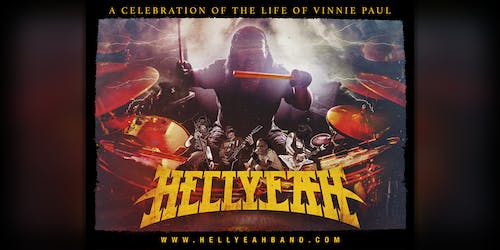 iCal
Google
HELLYEAH: A Celebration of the Life of Vinnie Paul | 9.7.19

It took Hellyeah just a few years to transform from an off-the-cuff side project to a serious supergroup, but this had no effect on the band’s primary mission statement: having a good time and playing heavy music. The seed of the idea that became Hellyeah was planted during the year 2000 Tattoo the Earth tour, between Mudvayne vocalist Chad Gray and Nothingface guitarist Tom Maxwell; then it began to germinate when the two bands toured together again in 2001. But Hellyeah didn’t truly take root until several years later, when former Pantera and Damageplan drummer Vinnie Paul was lured out of his mourning period over baby brother Dimebag Darrell’s tragic murder, and threw his lot in with Gray, Maxwell, plus recent additions, guitarist Greg Tribbett (also of Mudvayne) and bassist Jerry Montano (of Nothingface). Together, the fivesome recorded Hellyeah’s eponymous debut album and set off on the concert trail (including Korn’s Family Values and England’s Download Festival), but not before dispensing with Montano after a violent outburst during the album’s release party, and recruiting erstwhile Damageplan bassist Bob Zilla as his replacement. A second album, Stampede, arrived in 2010 and consolidated Hellyeah’s popularity by breaking into the Billboard Top 10; a third, Band of Brothers, followed in 2012, after which Zilla and Tribbett amicably left the group; and in 2014, album number our, Blood for Blood, was recorded with producer Kevin Churko deputizing on bass, and cracked the U.S. Top 20. Through it all, Hellyeah’s distinctive blend of groove, alternative and nu-metal has attracted a dedicated following, befitting a proper supergroup, instead of the rather humble ambitions that started it all.